Scientists at Leeds City College have found out in an unusual way that the more users logged onto the College VLE Moodle, the more the Moodle server actually weighed.

The Boffins have conducted a 6 day experiment weighing the server at different times of the day with a different number of students logged on. The weight of the server without anyone logged on is 10.8kg and with 124 users it's 10.821kg which is an increase of weight of 0.021kg. 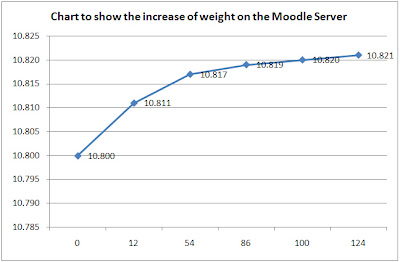 Professor Pilar Lofo from the Leeds City College Science & Research department claims that this phenomenon has which is called "digital-obesity" causes the hard drive and processor to physically expand in size by the occurrence of digital data shifting from one sector of the hard drive to another.

Further on from the phenomenon the scientists also conclude that the Moodle Server spikes in weight when students upload assignments and reply to forum posts.