Home » ipad » A new addition to my Apple Family

A new addition to my Apple Family

Tuesday, June 01, 2010
so it's Thursday the 27th may and According to Twitter, I'm hearing reports that people who pre-ordered the iPad are receiving them a day early. As a self confessed gadget geek I could hardly contain myself! Anyhow, it gets to 7pm and given up all hope of my new toy arriving early, the doorbell rang and my iPad landed.

As I already own the 1st gen iPod Touch and a iPhone 3G, this was a great addition to my Apple family. 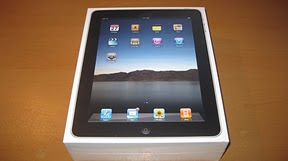 As any self confessed gadget geek would do, is unpack it and get it set up, well after taking photos! and after I got it synced with iTunes, I got it connected to my local wifi and I've loved it ever since.

The only problem I had was making the mistake of activating my iPad before inserting my O2 sim, which I found out after, dosen't download the settings for mobile Internet.

So 5 days on, It's a dream to use, Twitter is awesome, either with Tweetdeck or the Twitter website itself. My other website which I tend to spend hours on is Google reader and even before I got the iPad I was hoping that this would give me a similar experience to a desktop computer and it kind of does. I tried to use the full desktop and play version of Google Reader but I neither gave me a good enough experience of reading my news, so I've stuck to the mobile version of Google Reader and this does the job, much better than the iPhone ever could, well because of the size of the screen. 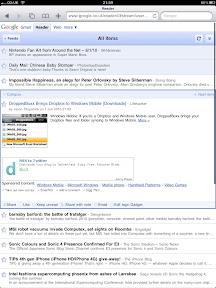