Thursday, August 19, 2010
So it's Saturday the 7th and I awake to remember one of the most bizarre dreams I've ever had. I dreamt that I had gone to sleep and woken up in the year 2000 - exactly 10 years ago. (Maybe an after-shock of watching Inception) - Now being no stranger to sci-fi and time travel, I do what anyone else in my position would do, Freak out, then buy a Lottery ticket.

My initial reaction is to reach for my iPhone and check Twitter, something I now do every morning but feeling a bit let down when I realised I have a Nokia 3210, no colour screen let alone Internet and going on from that, I remember that Twitter, Facebook and Youtube hasn't even been invented yet!

This made me realise how much we've actually come along within the past 10 years, and I woke to realise how lost I would be without the technology of 2010.

Internet was awesome, but it sure was so slow, I was still on dial up with Pipex Internet and I used to think it was acceptable, well it was at the time.

Yahoo was the future, well sometimes Altavista which still runs.

It was all about Netscape Navigator.

My email was with Yahoo, and it still is, with the same account (Somethings never change)

I don't actually remember any Social Networking websites apart from Friends Reunited which was all the rage back then, but you had to pay.

My desktop computer was a old Celeron processor (was old at the time) with a 15" CRT screen, My iPhone is now more powerful.

Windows 98 or Windows 2000 was what we had, pretty lame now but it worked then, most of the time.

Thursday, August 19, 2010
One of the most frustrating things about Moodle is the popup window that opens when a tutor uploads a file.  Not only does it open in a small window but it often crops of the side of the screen with the "choose" option.
Many tutors then miss out this vital step of clicking choose and often click the filename, opening the file instead.

So we set about trying to find the code in Moodle which changes the size of the popup window (by default this is set to 750px x 500px.

To change this to something larger simply navigate to the page lib/form/choosecoursefile.php
And around line 24 change the variables to the following:

Now when this window is opened it is large enough to see the file name and the actions. 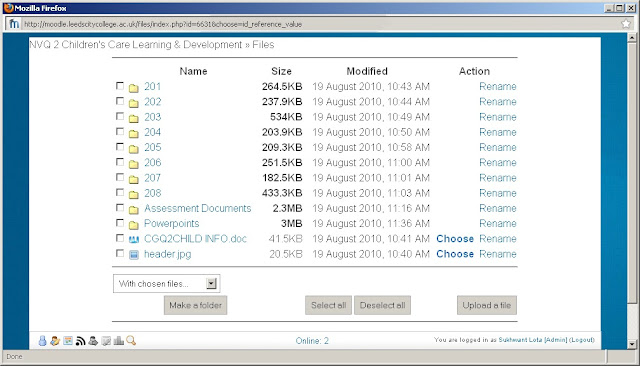 My Own URL Shortener with bitly.pro

I've been tinkering with the idea of having my own URL Shortener for a while now but didn't really know how to go about it, or even know what domain I want.

Firstly, I need a domain, something relevant and snappy and I came across lota.co - as the .co top level domains were only released recently I was lucky to get my surname.


I've always used and loved bit.ly in the past and so I applied to become a bitly.pro member. I was hoping that this wouldn't take too long, well surprisingly it only took about a week.

Once approved by Bitly.pro it literally took about 10 minutes to set up, I had to change my domain A record to point to bit.ly (168.143.174.9) once that was done I had to configure my bitly.pro account to link to my new domain.

I was surprised at how it automatically worked even with twitterfeed and Tweetdeck as they were already configured with my bit.ly API key.

Moodle Task List is a way for us to get staff and students to do things on Moodle, without being too obtrusive. On the MyMoodle page we create a list of things the user needs to do, such as upload a photo, add their mobile number to their profile page. Once the user does this, it vanishes from the MyMoodle page. 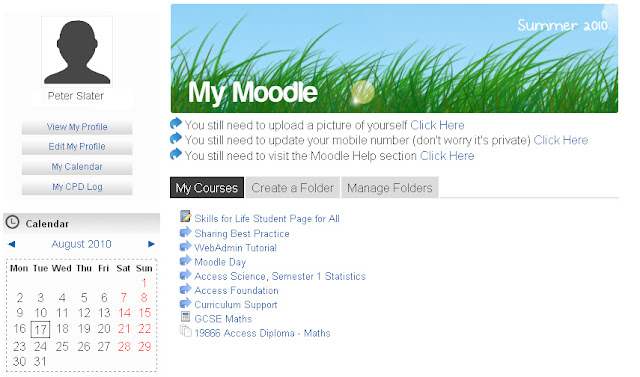 Moodle Task List is achieved with a combination of If Else statements looking at the Moodle Log table and has been a success.  Through research we've found that, although some users are just clicking on the link to remove it, the majority of users are interested with the content that is online.

It's based on the same format I used for the original Park Lane College Moodle Video, but it's been updated to give it a fresher look and feel.

Hope you enjoy the video and feel free to leave any comments.

All you need to do is add the following line of code in the HTML source of your theme :-

this line of code will usually go underneath:-

As the academic year has come to an end for most Schools, Colleges and University's, it's now time to get your Moodle Course ready for next year.

Like most teachers you'll probably want to keep most of the content and assignments online as it will still be valid for next year.

Please note that if you delete a Moodle Assignment it will also delete the documents that your students have uploaded.

Tuesday, August 03, 2010
Since launching our Moodle back in 2007 I've always tried to make the course page as friendly and welcoming from the start, trying to make it look simple enough so that staff will start to populate it.

Now, we're all used to seeing a default course page which looks something similar to this

It's usually totally blank with 10 sections and only the Administration block showing.  As this looks boring i've started to got the extra step to help staff to enjoy the look and feel of the course before content is even added.

Firstly I start by adding a few blocks on the side, blocks that staff and students will find useful such as the Calender, upcoming events, Recent Activity, online users and not forgetting the most important block, Administration.

Once I've added the blocks, I like to finish off with a header created specificly for the course. as shown below