Twitter, the social network that we all know and love has put in an bid to purchase Moodle from Martin Dougiamas, they are believed to be re-branding and re-launching Moodle as 'Moodler'.

Below is a screen shot of how 'Moodler' might look 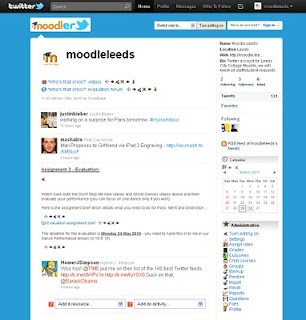 A spokesperson for Twitter has confirmed that they have spoken to Mr Dougiamas regarding the Purchase of the Virtual Learning Environment for an undisclosed amount, the deal is to include Martin's personal twitter account @moodler

Professor Pilar Lofo from the Leeds City College Virtual Learning & Business committee has gone on the record stating that it would be disastrous if Moodle was sold to twitter as users would spend all day checking tweets and not actually getting any work done.