Star Trek: The Next Generation Doctor Who - Assimilation 2 Review (Part 1) 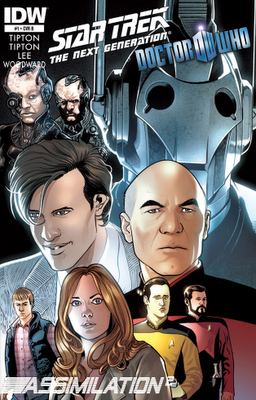 Ever since this comic book was announced I've had mixed feelings regarding this project, partly due to the fact that it's a comic and I've never really been 'into' comics before, I'm more of a TV/movie guy.

However after talking to Comic book geek Comics and Cola I grew excited at the prospect of my 2 favourite shows colliding on a whole new level.

Part one starts on the Federation Planet Delta IV which becomes under attack by a new combined force of the Borg and Cybermen.  It always seems strange to me why the Borg and Cybermen would join forces as each are clearly masters of their own race, I guess I will find out later on in the series.

The comic then moves on to the Doctor, Rory and Amy who are currently in Ancient Egypt being chased by Egyptians down an alleyway with the doctor on the hunt for a creature who is an escaped prisoner.

Once captured and back in the TARDIS, the TARDIS is on the move and materialises in San Francisco 1941.  The 3 proceed to explore a bar where they see Data, Riker and Dr Crusher. 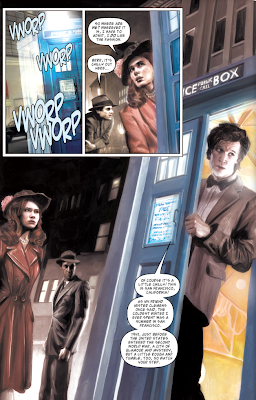 As this is the first comic book I've ever read I find it fascinating how as I'm reading through I can hear the actors speak as if they we're in the role, but maybe that's just me being a huge Doctor Who and Star Trek fan.

The first issue has perfectly set the premise for the whole comic, leaving a few unanswered questions.

Why have the Borg and Cybermen joined forces?  Cybermen have made it quite clear in the past that they see them selves as a superior race?

Was the Doctor meant to end up in San Francisco 1941 or was it the TARDIS?

Was it just a coincidence that they happened to walk into the same bar as Data, Riker and Crusher?

Are they on the Holodeck?