Star Trek: The Next Generation Doctor Who - Assimilation 2 Review (Part 2) 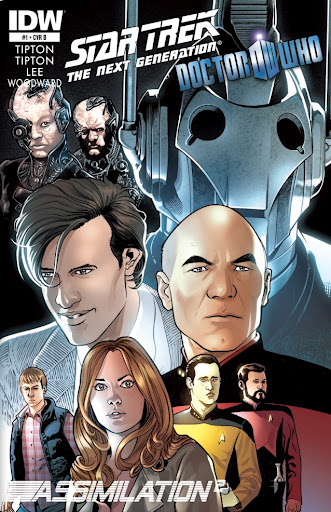 The second edition of Assimilation2 takes us back a little bit and starts on The Enterprise with Geordie checking Data's Positronic systems while the Enterprise is on a routine stop and greet mission to a mineral rich planet called Naia VII. The inhabitants of Naia VII are ugly fish people, I couldn't help wonder who would win in a fight between the residents of Naia VII and Mega Shark.

Commander Riker, Worf and Data head down to the planet where an accident occurs and the Enterprise crew are washed away leaving Data to save Riker and Worf.

It's interesting how this initial part of the comic although seemingly irrelevant to the overall story sets the pace and premise for the bigger picture.

As the away team return they are greeted by Captain Picard who would like Riker to test a system upgrade to the Holodeck. A new Dixon Hill adventure (as if the captain would want them to test any other program!) Riker along with Data and Dr Crusher head into the Holodeck where they are amazed by the real life smells and atmosphere. 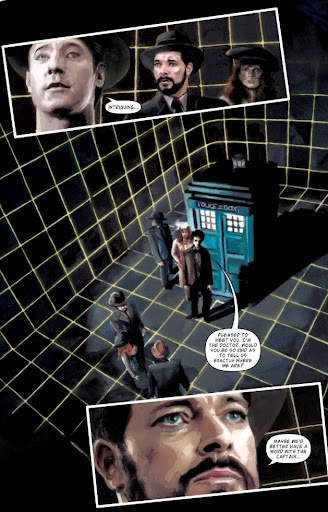 As this question bugged me I tweeted the writer of the comic who replied as follows. 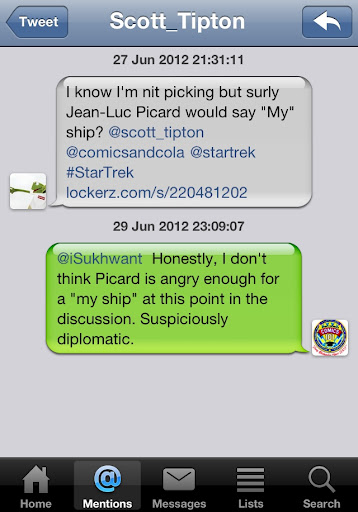 This reply only adds fuel to the fire leaving so many unanswered questions.

The comic ends with the Doctor and Captain Picard approaching the Delta System where they are confronted by Borg and Cybermen ships.

Why did the TARDIS materialise on the Holodeck?

Why is Picard suspiciously diplomatic? has he met The Doctor before?

Why doesn't The Doctor know any of the federation planets? He claims he knows all planets and galaxies.

How does he know what a Klingon is if he's never heard of the race before?