Star Trek: The Next Generation Doctor Who - Assimilation 2 Review (Part 4) 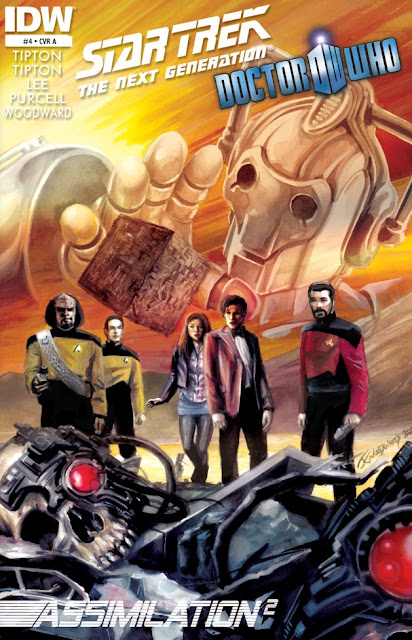 It seems like its been ages since issue 3 was released, I'm pretty sure it's been over 4 weeks?  I've been eagerly looking forward to part 4 ever since I read the ending of part 3 when Captain Picard introduced The Doctor to Guinan.  I've always loved Guinan in The Next Generation not just because her name reminds me of Belgian chocolates but because she is a unique and mysterious character much like The Doctor.  I wrote previously about one of my favourite Next Generation episodes being Yesterdays Enterprise where Guinan played a key role and it's exactly the case in this issue.

The Doctor and Guinan start to discuss the situation where they seem to know each other but they both agree that they shouldn't.  They then agree that the past has been altered in some way by the Cybermen bringing together 2 universes to form an alliance with the Borg.  While they are discussing the situation, Number 1 hails the captain informing him that the situation has changed.  During a briefing, Data explains that the Cybermen and Borg are now heading in an opposite direction.  They were assimilating a planet called Cogen V when the fleet suddenly reversed it's course.  Captain Picard decides to take an away team down to the planet to see exactly what's happened. The Doctor, Rory and Amy decide to accompany them.

I loved the next part when the away team beamed down to the planet much to Rory and Amy's amazement. Amy then starts to ask The Doctor, in typical Amy fashion "why don't you have this your on the Tardis?" when the team come under attack from some local drones. Once they have disabled them they make a startling discovery.  The Cybermen have double crossed The Borg and left them for dead.  Never trust the Cybermen I hear you say! 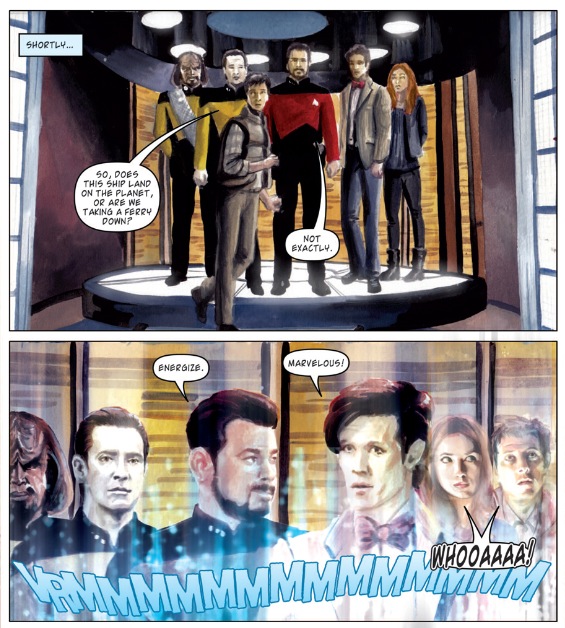 Back on the enterprise Captain Picard is being hailed by a subspace communication from a Borg Ship who are looking for a truce with Locutus of Borg (Captain Picard's Borg name) in return for an alliance against the Cybermen.  Captain Picard doesn't want to know and cuts them off. You can't really blame Picard given his history with the Borg, he would be happy to see every single Borg dead and wouldn't even think twice about saving them.  The Doctor on the other hand wants to hear out the Borg being the person that his is.

- This is a great issue, the pace is great and the story moves along nicely
- What's with the dodgy art work? the characters are barley recognisable throughout the issue
- Will the Doctor help save The Borg?
- if the tables were turned would The Doctor think twice about saving his arch enemy, The Daleks?