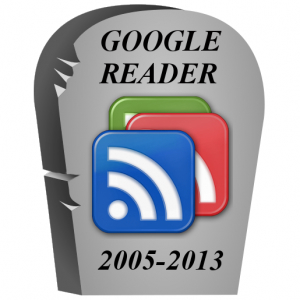 Google reader has been one of those web tools which I've always taken for granted. It's so integrated into my daily life with keeping up to date with news that I was shocked to hear that Google are killing the service on 1st July as part of their Spring Clean, presumably to concentrate on their less successful applications such as Google+

As I've been using Reader since it was 1st launched back in 2005 and I had to find a replacement which had some of the features of the Google service.

Reeder has been great, it's simple and intuitive to use and easily integrates with Google Reader so making the switch to Feedly wasn't going to be easy (until I had no choice!)

As Google had left me with no choice I persisted Feedly and I now enjoy using it, yep it's totally different to the Reeder app and an added bonus is that the Feedly Firefox plugin is very similar to the web Google Reader interface with even going to the extent of keeping the same keyboard shortcuts (j + k) brill!

Once Google switches off Reader on 1st and Feedly takes over, everything should carry on working as normal (hopefully).

I've even started to use Feedly now even though Google Reader is still active, I guess there's no point in waiting for the inevitable.

So in short,
If you use Google reader as much as I do then I would wouldn't hang around and make the switch to Feedly now.